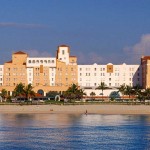 This hotel dates back to 1926 and was once home to Al Capone. Residents on the seventh floor have claimed to have captured numerous orbs and heard strange voices throughout the night.