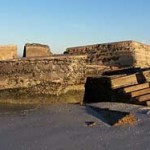 Check out the old fort at night and you may hear some ghostly voices. Footsteps have been heard in the powder room in the southern part of the fort.