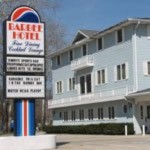 This historic hotel was frequented by Al Capone, who would stay in Room 301 and clear out all the rest of the guests so he could be alone. Cleaning staff have smelled cigar smoke coming from his room and have seen an ghostly man sitting in a booth in the bar. Witnesses also have reported footsteps on the stairways and in the halls. Rita Hayworth was also a frequent guest here, and some say her spirit manifests as a faint light seen from outside the building.